That’s all you really need to know right there…

…unless you want to hear how the Saints feel like they were robbed, like they should have gone to the Super Bowl, and potentially been the champions.

Late in the 4th quarter, the Saints and Rams were tied 20-20. The Saints had the ball deep in Rams’ territory, looking to run the clock down and finish off the Rams with at least a field goal.  With 1:48 left in the game, Brees drops back to pass to Lewis along the sideline. Before he had the chance to attempt the catch, the Rams’ Robey-Coleman hits Lewis, giving Lewis no chance to try and make the catch. Two referees standing right there gave the incomplete signal. But, it was clearly pass interference.

As Troy Aikman called it during the game, if Robey-Coleman turned to play the ball, it would have been an easy interception, and quite likely going 94 yards the other way. There would have been no one from the Saints to stop him.

It was a missed call.

It was a bad play.

The Saints settled for a field goal, taking the lead 23-20.

In overtime, the Saints get the ball first, but Brees throws an interception. Five plays later, the Rams kick a field goal and win the game, 26 – 23.

The Whining Heard Round The World 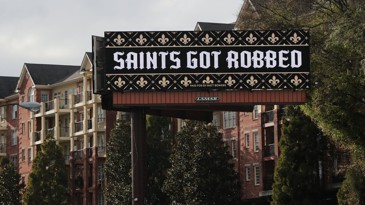 From that point on, the Saints coaches, players, front office, ESPN, and especially their fans whined and cried “unfair, cheaters, fixed.” They wanted to sue the NFL and force the Rams and Saints to replay the final 2 minutes over again. Some jackass from New Orleans blew tens of thousands of dollars (quite likely 6 figures), buying billboards about how they were robbed, why it was unfair, blaming the officials, blaming Roger Goodell, etc.

It was a spectacle, rivaled only by Hillary’s supporters throwing tantrums when Trump won the election.

Some have been calling this “unforgivable, the worst call ever.” Give me a break! Stephen A. Smith of ESPN stated from his lofty seat that the Saints loss was “on the league office.” No. I believe it was on the Saints.

That doesn’t define sports, but in the midst of a game, a season, or a career… crap is gonna happen.

Wikipedia defines “Snowflake” as, “a slang term for a person, implying that they have an inflated sense of uniqueness, an unwarranted sense of entitlement, or are over-emotional, easily offended, and unable to deal with opposing opinions.”

I think that hits the nail on the head. Ask Lewis… he took a shot to the head.

Here’s the big problem I have with all the whining going on – the Saints had 58 minutes prior to that play to put the game away.

They failed to do so.

They also had 1:26 after that play, plus over 3 minutes of overtime to stop the Rams.

They failed to do so.

The Saints failed to control the game and thus their own outcome. Instead, they put their fate into the hands of the referees to make or miss a call.

You ask any athlete or coach, and that is a recipe for disaster.

You never, NEVER give control over to the refs or umpires to determine the outcome of the game. 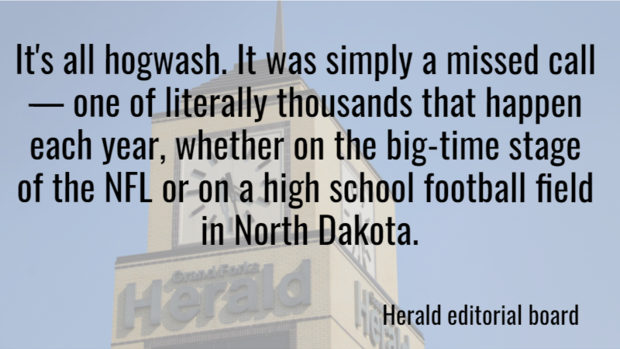 If the Saints (coaches, players, and fans) were honest with themselves, they let the game slip out of their hands with the punts, interceptions, failed drives, and failed stops long before the “missed call.”

Throughout any given game, whether regular season, playoffs, or even the championship, there will always be missed calls, bad calls, and no calls.

And, quite frankly, 2 weeks later in the Super Bowl, there was a horrible holding call (where there was no holding) and a missed, obvious pass interference call in the 4th quarter that quite likely would have changed the outcome of the game. I have no doubt.

And it wasn’t karma against the Rams. Please! Karma is one of those lazy words that dribbles off the lips of the mediocre and the apathetic.

Some may argue that bad calls shouldn’t happen at this level of the game. Whatever! That’s “snowflake talk.”

But, to blame the outcome of the game on what the referees and umpires did or did not do is completely irresponsible. If you can’t handle it, then walk away from the sport – whether player, coach, or fan.

In thinking about Snowflakes, the missed call, and the uprising of Who Dat Nation, I realized there is a lesson here to be learned. 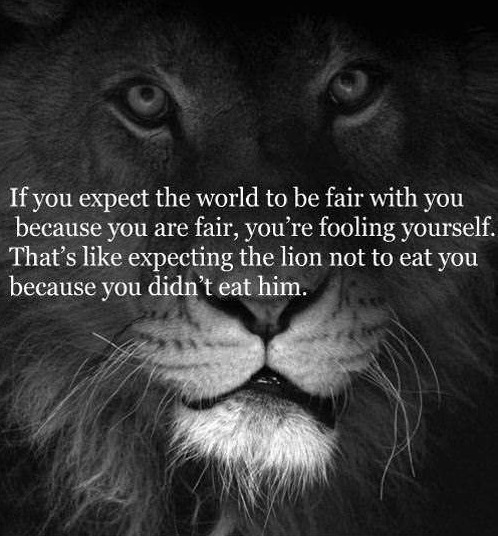 These things just happen. I look at that list in the previous paragraph and they have pretty much all happened to me and just about everyone else I know as well.

But, none of these things define me.

If you give control over to the company that did you wrong, the friend or spouse that betrayed, the thief who broke in and stole, or the sickness you didn’t know was growing inside you or your family member… you will likely begin the “slippery slope slide” into blaming others and God… and thus achieve victim status.

Much like the Snowflake Saints, who have chosen to blame the refs instead of taking responsibility for the missed opportunities in the previous 58 minutes of the game, we must not put our happiness and well being into the hands of the crap that happens in life.

I can either be consumed by the crap of life, or wake up on purpose and control the things that are within my control to control – living my life not as a victim of circumstance, but as a victor who is going to go back onto the field and crush it.

I could go on about all this, but the point and the parallel are more than obvious. I think the lion graphic above sums it up nicely.

Listen, in the grander scheme of things, in perspective of all the real life stuff that comes our way, this was just a game. No one contracted Ebola or was stricken with leprosy as the result of the missed call.

I do get it. We all want things to be balanced and fair. Sometimes they are. Sometimes they’re not. That’s just life. And until Aslan returns to set all things right, we will continue to experience moments of injustice.

It’s how we respond to these things over time that determines our character. We all act like snowflakes from time to time. But when days and weeks turn into seasons and years, then we have a problem Chuck.

And seriously, to the Saints, I wish the call had been made. But if you went back and watched that game, play-by-play, and scene-by-scene, you would probably see several missed calls that the Saints benefited from.

Let’s move on. In a few months teams will take the fields again and reset for a new season, slates wiped clean.

I feel like the greater story in all this is that the Rams won. That has barely been  mentioned. The media’s story was more about the loss than the win… and that’s where many have gotten lost. The real story is about the win!

The Rams overcame a deafening crowd in New Orleans. They never led in the game until the end when they won it. They made their adjustments throughout the game and took advantage of the opportunities that came their way. Bend but don’t break. They drove 45 yards in about 1 minute and sent the game into overtime.  In overtime, Rams’ kicker, Greg Zuerlein, made history with the longest field goal ever in the NFL playoffs – a booming 57 yarder! And the Rams won! 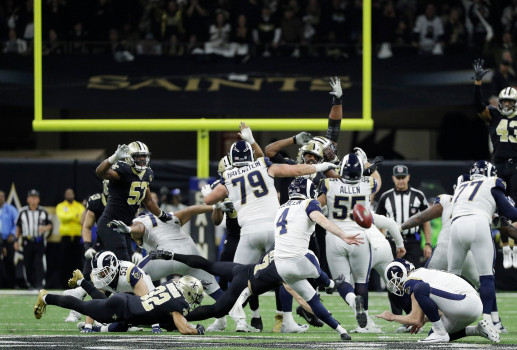 The LA Rams kinda stunk it up 2 weeks later in Super Bowl LIII (I really have no idea what Sean McVay was thinking). But, the right two teams played in the championship game. And as painful as it is for me to say this, the right team won in the end. Congratulations to the New England Patriots.