Back in August I wrote about the mistake I made about doing business with a friend (you can read about it here). It is 2 months later, and the mistake continues to

As a quick summary, back in June of this year we had some nasty storms move through the Dallas, TX area. We had quite a bit of hail damage. A friend from church came and looked at my roof and said it qualified for an insurance claim. I made the claim with State Farm, was approved, and got my check to do the work in July.

I had to put the work off till August because of other expenses and having to come up with our part of the deductible to get the roof re-shingled. We set the date for the repair and then the wheels began coming off.

1) It all began on the day the roofer were supposed to show up. They didn’t. After calling around, they showed up at 2pm (7 hours late). The job they did over the next 2 days was less than professional. Half the time they were sleeping between the houses in the shade. There was no supervisor on site. No owner of the company. Nothing. Problem #1 – they were late and they did a sloppy, lazy job.

2) When they were leaving at sunset on the 2nd day, they dragged a 2 inch by 4 inch magnet around one side of the house, picked up a few nails, and left. Over the next few days, we found hundreds of nails, staples, and splinters in the grass. We called them back out to bring a roller magnet. He went through the yard again, picking up scraps of shingles left behind in the bushes and yard, picking up a gallon size bucket of nails, staples, and more splinters. I understand there would be nails, but they didn’t even bother to pick them up. Between what we picked up and what they picked up when they came back, there were several hundred left in our grass (and we’re still finding them). Problem #2 – we had a lot of nails go thru our shoes.

3) When the roofers were bringing bundles of shingles on the roof, they would carry them and place them where they needed them. There were huge, thundering booms on the inside of the house as they did this. That’s fine. As they got to the back side of the roof, they were no longer just setting them down. They were tossing and dropping them. Our house was shaking and caused a section of our garage ceiling to cave in. Nothing was broken underneath, but we had to clean up the mess and now deal with a huge hole (about 4 feet by 6 feet). Problem #3 – attic heat and repair work.

4) We had a ridge vent installed to increase ventilation.  I was told at the time of purchase that they knew what they were doing. The end result is this wavy, cheap vent along the top ridge of my roof. It’s not straight or even. And when I go upon the roof, it is very weak around the ridge where they did not reinforce it at all. Problem #4 – it looks sloppy.

5) When the roofers were leaving my house they were holding my satellite dish. “Do you want this?” Yes, I want it. I was told it would be reinstalled because they had done it before. They Olympics were on, so I wanted to watch. When they left, there was no signal. I went upon the roof and the dish was pointing 90 degrees in the wrong direction, it was wobbling everywhere, and there was a huge mess of black, goopy caulk they had squirted around the dish. I had to call DirecTV and they sent someone out, costing me $55 to re-align the dish. I later got that money taken off my second payment to the roofing company. Problem #5 – more time wasted fixing their problem.

6) The roofers used the wrong nails on my patio. The underside of my patio now has about 400-500 nails sticking through the decking because they used the wrong nails above when putting on the shingles. I’m going to have to cover that later when I have the time and money with another layer of decking to form a ceiling on our patio. Problem #6 – more time and money spent on a job done wrong. 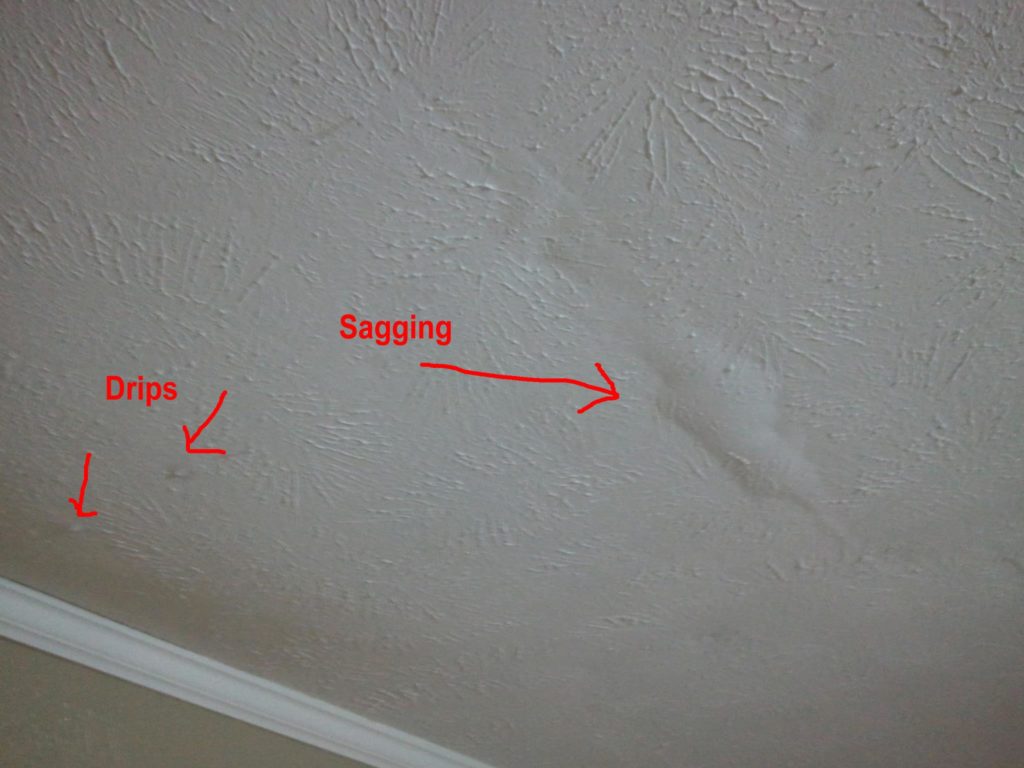 7) Just when I thought it was done, it began to rain finally in late September. We quickly found out my roofing job had a problem. We had water coming into the bedroom… a lot! We called them up and they sent a crew out to find and fix the leak. Come to find out, they forgot to put shingles in one area of our roof!!! The water was pouring in. Problem #7 – a leak is never just a leak. They tend to cause problems in the future.

9) The guy who came to fix my ceiling (2 days ago now) was a nice guy. He patched my ceiling and I also had him fix the ceiling in my garage. When he left, the garage looked decent, but the bedroom ceiling was shiny and didn’t match. I gave it till the next day to let it continue to dry. The color isn’t great, but not horrible. BUT, I realized he did not SAND THE JOINTS!!!!!! When you do drywall, you put mud and tape the joints. After they dry, you sand the joints to make them smooth, and then apply texture. This guy did not, and now I have this UGLY rectangle in my bedroom ceiling where this guy patched the ceiling. Problem #9 – I am going to have to fix this myself. I will sand it, retexture, and repaint it. More time and money wasted.

10) The guy who fixed my ceiling left me a few presents in the street. As I pulled up to my curb where he had been parking and doing his work, my tires picked up some nails and drywall screws. So, I wasted a couple hours getting those tires fixed. Two tires had to be “warrantied-out” and had to get two new front tires on my van. It’s always nice to have new tires, but at $226, I wasn’t planning on spending that. Problem #10 – wasted time and money on getting my van fixed.

I have wasted over 3 months dealing with this roof, and it’s not done. I still need to go spend another $500 fixing my patio from their careless roof job. It has cost me far more money than I had anticipated. When it’s all said and done, I’ll be out of pocket about $3,000, not to mention the money they received from State Farm in the insurance claim. I’ve also wasted a lot of time, calling people, chasing people, trips to the store to fix things, having to not work so I could be there when workers were here fixing things.

It all began with the fatal (well… maybe not fatal) mistake of doing business with a friend.

I have neighbors who used other roofing companies from the same storm. They’re happy as clams. Nice jobs.

The mistake that keeps on giving… hopefully it is done giving after I finish this patio.