When I write a blog post, I usually type out my thoughts, edit, delete, add, proof, and then publish. After I publish I go out and try and find an appropriate photo or graphic to match what I just wrote.

This time was different. I went out and found the photo and then the words began coming to me.  Here’s the photo:

The road you see is one that I have been traveling on for almost 11 years. It’s not always been paved. In fact, in the beginning it was just a trail that finally opened up into something like what you see in the photo.  But as I continue on my journey, this is my current view – a nice smooth asphalt road that, huh, just seems to end.

I suspect I have about 200-300 yards, and then I’ll reach the end of the road. It empties into a rough, gravely terrain that is likely the result of rock slides and erosion from the cliff that stands beyond.  It doesn’t look like there is anywhere to go to the left or to the right.  It just comes to an end.

If I worked hard, I might be able to extend the road another 20-30 feet, maybe even blast my way through and build a tunnel. There may have been a time for that, but not this time. The end is the end, and when it’s the end, it’s not worth fighting for a few more feet of road.

Another option – I could turn around and go back the other way… the road is striped down the middle for 2-way traffic. But, at the age of 48 (and soon to be 49), my experience has taught me that it’s fruitless to travel back.

Dennis Waitley said, “Learn from the past, set vivid, detailed goals for the future, and live in the only moment of time over which you have any control: now.”

The End of This Road

I’ve been running a successful online business, now in its 11th year.  That’s pretty darn good, if I do say so myself. Let me say, the journey has been good. I’ve learned so much and have been blessed beyond what I deserve.  Most people dream of what I’ve been able to do – work from home, no commute, call my own shots.

My business has enabled me to do so much, and I hope that as I’ve traveled along the way, others have been blessed and I’ve had a chance to do good and to honor God.

However, God has been preparing me for the end for a while now… but I’ve just not seen the end until now.

“Change is the law of life. And those who look only to the past or present are certain to miss the future.” ~ John F. Kennedy

Okay Rich, what do you have lined up next? What are you going to do?

I don’t know. I believe God was more interested in me seeing the end before showing me where the next journey is to begin.

I have believed for quite a long time that God has been waiting for me to take this step of faith, and then he would reveal my next step. It doesn’t sound very logical from a human standpoint, but for me, I believe it sounds divine.

So, what’s next… that’s a good question. There are things stirring in my heart and visions that God has given me. I’m not sure how any of them will connect or how they may unfold.  We will see, and I’m excited for my future…

…and it’s been a long time since I’ve been excited about my future.

That is what I am looking forward to the most – being excited again!

For the past 33 years, I have looked in the mirror every morning and asked myself: ‘If today were the last day of my life, would I want to do what I am about to do today?’ And whenever the answer has been ‘No’ for too many days in a row, I know I need to change something.

Back To The Road Photo

Take a look at the photo of the road again… where do your eyes go?  For most people, they look at the very end of the road, where the road just seems to end into the gravel and cliff. Does the road really end there? I don’t know… but that’s not where I look.

Some people look at that cliff… the canyon wall. It looks very tall, and not many options for getting around it.  It looks pretty steep, except for one possible way up, through that crevice on the left. But, for the most part, it looks pretty intense… and not real safe… but that’s not where I look.

When I first saw this photo, sure I saw the road and the canyon wall, but my eyes immediately went to the horizon, looking over the top of the canyon, wondering what lay beyond. Being on top sounds exhilarating, but what lies beyond those hills? What adventure is beyond my view?

For me, the greatness of this photo is not the end of the road, but the unknown that lies beyond.

That’s where my heart is.

I have a journey to finish. There is still some road left to travel on. But, I finally see the end and I’m good with that.

Taking a Peek Back

One of the lessons I can learn to prepare me for a new adventure is to look at the road I’ve traveled.  I’m sure if I could look over the entire road I’ve traveled since 2003, it would be difficult to fathom some of the obstacles that we have crossed. The only reason for me to look back is to have the confidence that God brought me through the last 11 years – He’ll most certainly bring me through the next few months. 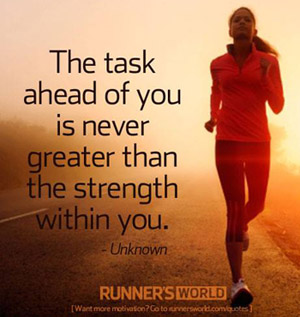 After all, I operated a top-rated business for more than a decade, out-paced my competition, had other companies pursue me, and reached milestones that the majority of my competitors fell short of. I saw many other companies come and go during these 11 years. I believe I’ve proven that I have “it.”

But, that is my only reason to to look back. I know I can make it and I know that He will lead me. Period.

I took up the sport of running a few years ago. I’m not quite ready to Boston Qualify, but running has taught me that there is a strength and determination within that has helped me overcome pain, fatigue, weakness, and doubt. As the photo from Runners World says, “The task ahead of you is never greater than the strength within you.”