It is an unforgettable and wonderful series of memories as I go back in my mind to an early September day in 1987. I cannot help but pause and reflect how it all began — it was the beginning of “Us.”

It was the first couple weeks of my senior year in college. Soccer practice had just finished and I was on my way to dinner. I walked into the college cafeteria and the new girl who was checking off our meal tickets had instantly grabbed my attention.

She was a petite, short-haired brunette with hazel eyes. She asked my name (so she could check me off the meal list). My best memory has us both smiling and making lingering eye contact… probably wrong… but I was sure looking at her!

Making my way down the food line, I got my tray and picked out my food, but kept looking back down at the meal-ticket girl… probably obnoxiously obvious. She had my name, but I didn’t have hers. I was just another check mark, so my name was probably quickly forgotten as she checked off a couple hundred other people’s names.

Time For The Charm

I was co-captain of the soccer team. A senior. Not a bad lookin’ dude. A Student Rep for the college. And, a pretty impressive 3.2 GPA student <cough-cough>.

Soccer practices ran until 6:00 every night, so I was always getting to the cafeteria later than most students. By that time, crowds were less and I thought I might be able to linger in line. Friday’s practice was over and I really wanted to talk to the cafeteria girl and turn on all my charm.

By this time I knew her name — Traci. The reason I knew this was my best friend had been asking and let me know before he left to drive home for the weekend.

I walked into the cafeteria.

There she was again. I was captivated and began mumbling a few stupid things (so much for the charm). We must have chatted for a full 30 seconds. She was incredible! However I was a mess, being sweaty and nasty from practice. 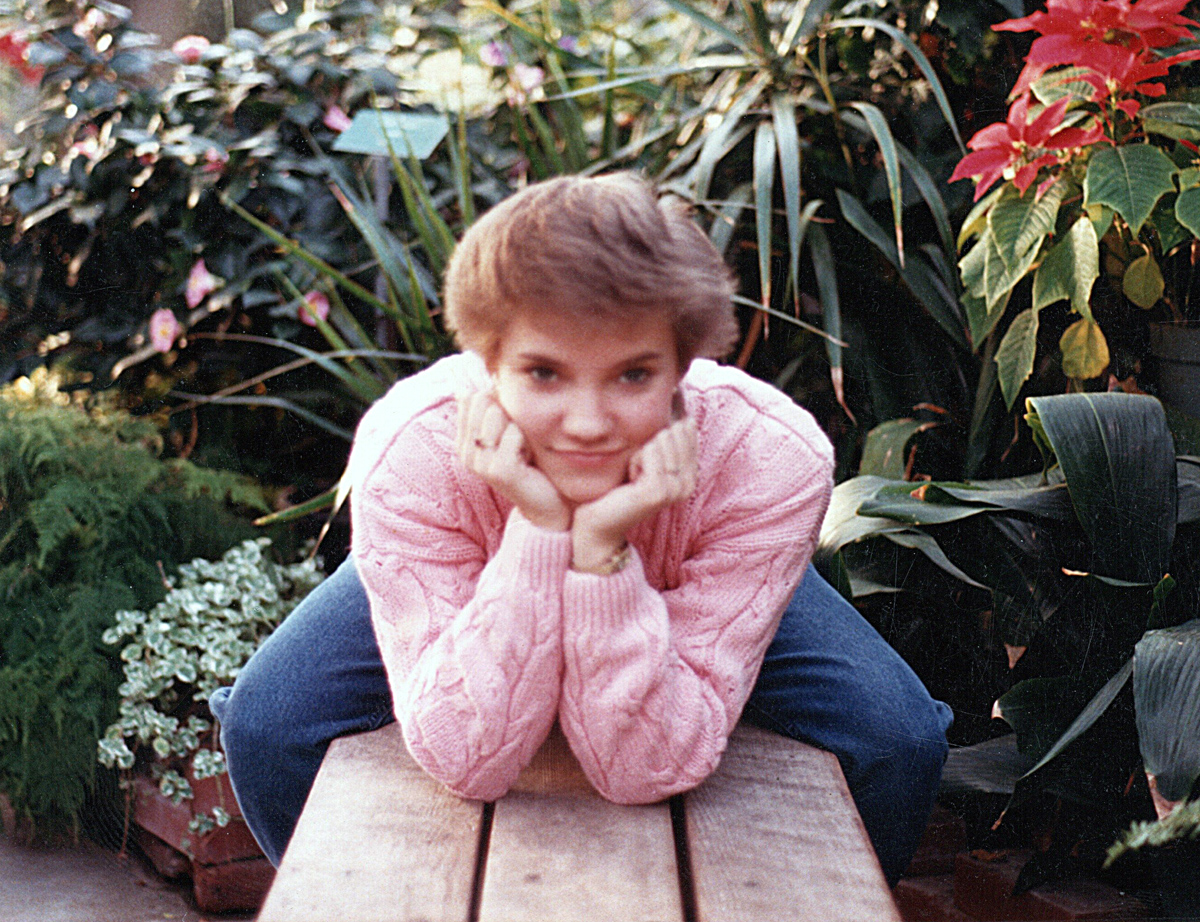 After eating my dinner with the rest of the soccer team, I carried my tray to the window where we set our plates to be washed. There she was again. She had moved from checking meal tickets to washing the dishes.  This time I couldn’t leave. We stood and chatted, flirted, and laughed — and then she found out I had a truck. She had no vehicle.

I couldn’t believe my luck… after she got off work I was giving her a ride into town to run a couple errands. Hairspray and stuff. I quickly went and showered and got cleaned up. Was she just using me because I could give her a ride, or did she really want to be with me? It was a Friday night after all. I would like to believe the latter – but truth be told, I didn’t care.

We spent the next several days “bumping into each other” around campus. She was a freshman from Quincy, IL. I was smitten and could think of little else. It was time to ask her out for a real date (not just running errands… although I was counting them as dates).

The town of Lincoln had a dollar theater. Perfect. There weren’t many expensive restaurants in town. I think Bonanza was about as good as it got. Perfect. Two state parks with trails and wildlife. Perfect.

Our first dinner date was to Bonanza. We went through the line, paid for our food, and sat down to eat. As we started eating, I was trying desperately to think of something to talk about.

So I asked Traci, “Do you eat your dinner one thing at a time?”

She said, “No. My youth minister’s wife does that, and it drives me crazy!”  Then glancing down at my plate… “oh… do you eat one thing…?” as she realized how I had been eating my food.

Traci flashed into a deep shade of red and we laughed for several minutes at the embarrassment of the situation. From that moment on, I committed myself to never eating one thing at a time again.

Our first date quickly became several dates. Apparently my pathetic attempts at conversation did not scare her off. We ran the gamut of dating opportunities in a small town — we went and saw a couple movies at the dollar theater and had dinner at Bob’s Roast Beef and Hardees.

As September progressed, we were taking advantage of all of our free time to be together. One thing we enjoyed doing was hanging out in the dorm common rooms — lots of laughing, being with friends, campus devotions, and playing pool and ping pong.

We walked around campus a lot. Autumn nights in central Illinois are quite pleasant and hopelessly romantic. We walked the various sidewalks, holding hands, hearts beating, laughing, flirting, and finding ourselves heading toward the chapel.

After sitting on the wall beside the front chapel steps for several minutes, the September stars looking on – we had our first kiss.

And I would never kiss another.

Then… to my incredible fortune, about 45 minutes away in Peoria, IL, Dan Fogelberg was going to be in concert. Traci said yes and I bought 2 tickets. 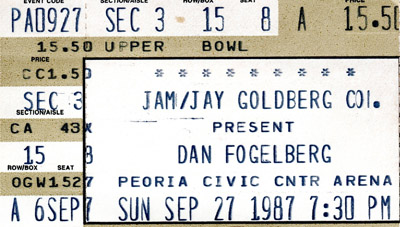 It was an unforgettable Sunday evening. We were sitting close together, about half way back on the left side of the stage — getting lost in the music and the lyrics. I had my arm around her shoulders and her hand was on my thigh.

If there was ever anyone who could sing ballads and lead a new couple closer, it was Dan Fogelberg. We were racing forward (in pure Bible college fashion) with both of our feet on the accelerator.

After the concert, our young relationship began growing into something more serious. We spent as much time together as possible, including going to the library to study. I’m not sure exactly how much reading I ever got done because I think I was staring more than I was studying. Traci was always an excellent student, and eventually her good habits rubbed off on me, helping me make the dean’s list for the first time ever that fall semester.

On days when Traci wasn’t working as meal-ticket-girl, we would eat dinner in the cafeteria after soccer practice, spend time laughing with our friends, and then continue to sit and talk long after all the other students had left… at least until the kitchen staff began locking the doors.

Among my favorite memories are the conversations we would have. I remember laying on our backs on the tennis court, gazing up at the stars, sharing our dreams, our heart’s desires, God’s purpose in our lives, and all of the big ideals that lay before us in life. That Fall we spoke a lot about our past, our families, and things we had rarely (or never) shared with anyone else.

In Lincoln, there wasn’t a lot to do, so you took advantage of what the area had to offer. Kickapoo Creek Park and Railsplitter State Park were only 10 minutes from campus. We went there many times to hike the trails, see the deer, toss rocks in the creek, and enjoy being outdoors together.

We visited my hometown, Springfield, several times… meeting my mother, sister, and grandmother, and visiting my old stomping grounds. I drove her home to Quincy to meet her family, saw her hometown, where she had worked at TCBY, and the church where her dad preached.

Weekends were fantastic! Along with visiting our hometowns, we would jump in the truck and visit other nearby towns and shopping malls, walked the square in Lincoln, did “dinner and a movie” dates a few times, went to church together, and spent some afternoons fishing.

Traci was my biggest cheerleader as the soccer season moved into late Fall. There was one game where I was playing left wing and I scored a goal connecting off a cross pass. Out of the adrenaline rush of having just scored, I ran to the sideline to give Traci a kiss. My enthusiasm had me running a touch too fast and I came in kinda hard for a bit of a “rough” kiss.

College life was perfect for us. I would “buzz” her room and she would come down so we could attend our college’s basketball games, go to a student counsel campus event, or just take more long strolls across campus.

One of those evening strolls ended in an all-out whip cream fight on the lawn outside Restoration Hall. I had planted a couple cans of whip cream earlier that evening… and the fight was on! Whip cream was smeared in our hair and everywhere, making us a sweet and sticky mess by the time we walked into the girl’s dorm 30 minutes later.

The Toyota truck found itself on many adventures where we took looong drives on the Logan County country roads (a.k.a. roady poppin’). Off-the-beaten-path farm roads, covered bridges, full constellations on display, laughing, telling stories, serious talks, making out, and best of all, my little truck had a bench seat so Traci could sit close beside me as we drove… just making it back to the dorms a few minutes before curfew.

The weather began to grow cold and 1987 was coming to a close. There were the traditional end-of-semester campus events to attend and (of course) the stress of studying and sitting for final exams and turning in research papers that were due on the last day of class.

Christmas break had arrived. Traci went home to Quincy and I drove my truck home to Springfield.

After a long 2 weeks of Christmas with family, I picked up Traci so we could spend New Year’s Eve together at West Side’s campus house party in Springfield. In the waning minutes of 1987, while many around us were making their resolutions, I slipped a promise ring on Traci’s finger.

We both knew that the cafeteria girl and the soccer guy were head-over-heels in love with each other.

Thirty-four autumns have come and gone since then.

The fall of 1987 was the beginning of an incredible romance. I wouldn’t change a thing… except maybe to skip studying in the library at least one night so we could take one more drive out on the Logan County backroads.

(I wouldn’t mind going back to central Illinois soon and drive the ole backroads, find that covered bridge, and get stuck in that farmer’s field again.)

For most of my life the number 13 has been my favorite number. It was my soccer number in high school and college.

Fall ’87 was when I first saw Traci just inside the cafeteria doors checking meal tickets, when we hopped in my Toyota truck and went into town to run a couple errands, first kissed by the chapel steps, and fell in love on a small Bible college campus.

87 is my new favorite number — it was the “Beginning of Us.”