Yesterday I ran the Dallas Rock n Roll Half Marathon.  It was my 3rd time to run a half. I knew a bit about what to expect, but things changed in two ways leading up to the race: 1) I injured, and then re-injured by back in the 3 weeks leading up to the race. It’s hard to run with a bad back. I missed several of my practice runs and the runs I did had to be cut short. 2) The weather turned cold for us here in Dallas. It was 41 degrees for the entire race with winds blowing at least 25 mph. Some gusts were stronger. 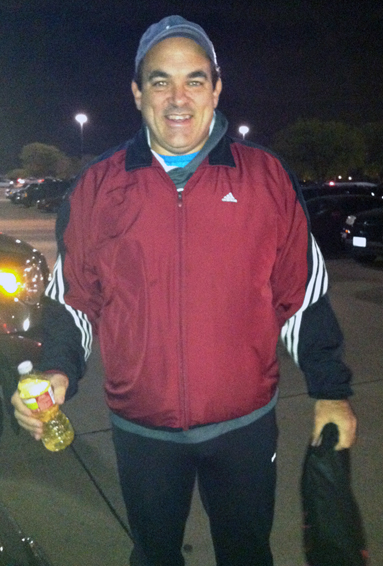 The night before the race I am trying to make a decision if I stick with my shorts or run in running pants. I lay both of them out and take both of them in the van with me. I have to ditch my phone tracker (an app called Runkeeper) because there isn’t enough room for the GU packets I want to pack. So, plans change.

My strategy for the race is to eat a GU before the race and at miles 3, 5, 7, 9, and then eat a couple of Clif Blocks at mile 11.  I wanted to keep my energy level as level as possible and not have an up and down cycle as my energy levels drop. Sometimes they recommend every 45 minutes for these GU packets, but I needed something different.

On race morning it was cold. I had on my race pants, a sweatshirt, and a coat. The course layout is different than most. You start in one place and end in another. So, you park at the finish and take a bus to the start. Due to the fact that 11,000 other runners were there, you had to get to the “starting village” early, giving you about 90 minutes to stand in the cold before the start. Runners were huddled against buildings and looking for places to get out of the wind. At 7:40 I decided to stay with the pants but run in my short sleeve shirt. I checked my sweatshirt and coat at the gear-check area, and headed to the start.

One cool thing I picked up at the expo was this tattoo from Jamba Juice. It is called a pace tattoo. You apply it to your forearm and it breaks down your time splits per mile so you know what you have to keep. At 7:40 I poured some cold water over my arm and applied the tattoo.

My mindset was I wanted to give it my best. This may be my last half marathon. I want to do something different. So, I figured I’d give what my legs had in them to give.

The first 8 miles were flat to uphill. I felt I held a good pace, and I was about 1 minute under the split times on my tattoo.  The wind was cold and blowing hard at times, but it seemed to be blocked in the final 5 miles from the buildings.

At mile 10 I was about 1:15 under my tattoo time. I slipped on my ipod with some songs I had picked out the night before to hopefully give me a boost. I started out with Switchfoot’s “Stars.” It really lifted my spirits. At a couple points in the song I was running with my arms out… looking like a dork I’m sure… but I realized at that point, it was time to have some fun. I followed that with Bruce Springsteen “Born To Run,” Michael Jackson “Beat It,” Van Halen “Jump” and a few other songs. Not my favorite songs, but good running beats.

The last song that played was Cheap Trick’s “Ain’t That a Shame.” Not the whole song, just the 2 minute intro. I had wanted to close a race for the last 2 years listening to this song. This was my chance. It has a fast beat, the crowd screaming, the intensity of the drums, crowds, and guitars all building… with what I thought was 2 minutes to go I clicked the next button on my ipod… 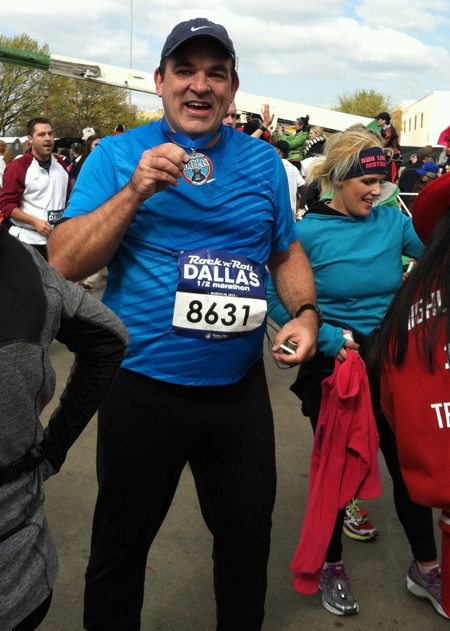 It was incredible. I felt this surge and picked up my pace. I found myself getting quicker and quicker, and finally took off on a full sprint to the finish. I felt better at mile 13.1 than I did at mile 1. I crossed the finish line at 2 hours 18 minutes 37 seconds. I was 1 minute and 23 seconds under my tattoo time. I had beat my goal time. I feel I had given my all and given my best.

I got my medal and found Traci. She’s always been a big supporter (which she had to endure this cold weather on her end… waiting, waiting, waiting for the start… and then all the time I was on the course). I felt great.

As I have reflected on this, I feel like I did my best. At the most, I could have maybe been 1 or 2 minutes faster. I was a bit slower at miles 4 and 5, but that is one of the uphill parts of the course and the wind was blowing hard in our faces the entire time. It was a wind tunnel blowing down Lakeside Drive. I could have gone a bit faster through there, but felt I actually held pretty strong in the wind.  At miles 8 & 11 I’m not sure I was hitting it as fast as I could have, but I actually did better at those miles than I had in practice runs.

In the end, I feel like I ran my best race. I certainly wasn’t the fastest. Not by a long shot. I’m not going to be a poster boy for the Rock-n-Roll Marathon series, but I’m pretty happy with how it turned out. Not very often anymore do I get this incredible feeling of having given my best, left nothing in reserve, and reached a goal that I had set out to do.

I think one of the most satisfying elements of this race was I had planned out this race, mile by mile, and had run my race. In the future I may do another half, and will probably do it faster (maybe breaking the 2 hour barrier), but I’m not sure if it will feel this good.