In the fall of 1984, I began my freshman year at Lincoln Christian College. That first week I would meet 3 people – my missions/church growth professor, Ron Butler, and his two sons that were on the soccer team with me, Greg and Jeff. All 3 of these guys had a profound effect on me that shaped me for the rest of my life. Greg and Jeff would tell me endless stories about how wild it was growing up in Zaire, Africa, teaching me Swahili words in case I ever found myself in Zaire, and teaching me how to live life, rather than just exist. 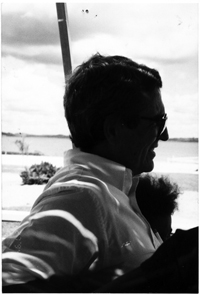 Ron, and his wife Carolyn, had quite a profound effect on me as well as they shaped my mind and challenged my thinking. God was leading me in a direction, and placed the Butlers in my path that would eventually lead me to my first trip to Africa in 1988. Whether in class or at their home, Ron befriended me and challenged me to consider a life in missions. I lived with them briefly in 1988 while in Zaire, and then later, after I got married, returned and spent more time with Ron and Carolyn at their house, and on ministry trips into the smaller villages.

For the last 20+ years I have called Ron Butler my professor, my mentor, my soccer training coach, fellow butterfly collector, and my friend. On May 14th, in Cape Town, South Africa, Ron passed away and met his Savior, Jesus, face-to-face. Today, in Lincoln, IL, a memorial service was held to celebrate the life and ministry of Ron. The following is taken from the Lincoln Christian College website:

Ron studied for the ministry at Lincoln Bible Institute/Lincoln Christian College and Seminary, and eventually received his Doctor of Missiology Degree from Trinity Evangelical Divinity School in 1994. He wrote his doctorate on the TEE (Theological Education by Extension) program that he supervised in Zaire during the ‘90s He oversaw the printing of thousands of TEE books, providing material for hundreds of classes. After moving to South Africa he continued his focus on TEE by working at Pollsmore Prison with Hope Prison Ministry, and leaves a legacy of young male prisoners who will remember “Dr. Ron.”

Ron also supervised on a daily basis for many years the United Bible Society translation of the Swahili Bible, and after the move to South Africa made frequent trips to Zambia to oversee the translation of the Mbunda Bible. Sadly, his copy of the Mbunda Bible that just came off the press arrived by DHL the day after he died, but he knew the project was successfully completed.

Ron was also a passionate Bible teacher. Home Bible studies, college level classes, classes in the public schools in Bukavu … he never refused an opportunity to teach God’s word. He was a dedicated preacher, and his deepest joy was studying for sermons.

He was a lover of books of all kinds, a passionate sports fan (the only kind that can support the non-winning Chicago Cubs for an entire lifetime), a lover of nature, a butterfly collector. He said many times in his last few months that if he had a choice of anywhere he could be, he would choose a walking safari in the Ituri Forest of the Congo, butterfly net in hand, chatting with a group of preachers and anticipating the welcome at the church in the next village.

Ron was a character. He loved people and always found some way to relate to them. He attracted children like honey attracts bees, and leaves a large number of children of several cultures who called him Grandpa.

People who watched Ron deal with cancer for just over two years commented on both his acceptance and his determination. He never lost hope but he never pretended. Perhaps the best summary of his life and death is that ‘he rang true to the end’. There was no failing of faith, no questioning, no departure in any way from the truths and the priorities he has always held.

I rejoice for having known Ron, the untold number of Africans who are around the throne because of Ron’s ministry, and I also consider the loss our world has now with one less voice, one less light on the continent of Africa.

Thank you Ron, and may I and those around me live as you taught us and challenged us.