From Springfield, IL in high school, to Lincoln, IL in college, to Zaire, Africa after college.

In the Spring of 1988, two great things happened:

Two weeks after graduating I was on Sabena Airlines with 2 other guys, Curtis Brunn and Dan Owsley, heading for a place I had only dreamed about, watched slide presentations of, and had heard story after story from the Butler family.

–Side Note– Zaire is the former Belgian Congo, and what was formerly known as Zaire is now the Democratic Republic of the Congo. — End of Side Note —

You cannot fly directly into Zaire… at least not safely.  So, our 747 touched down in Bujumburo, Burundi.  There, we met 3 missionaries who were going to take us into Zaire.  Ray and Ted Harkema, and Jeff Reed.  I can still remember, these guys looked like cowboys from the old west.  Slightly dusty, a little weather worn, and an edge about them like they were living on the frontier.

We drove from the airport in an old green Ford work truck that liked to overheat every few dozen kilometers.  Along the road, many Hutu and Tutsi women carried loads on their heads and backs.  The air was hot and dry. 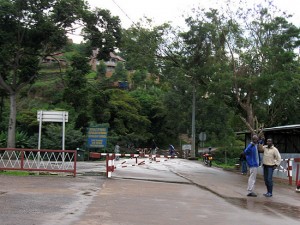 Due to the large number of bags we were bringing into the country for other missionaries, the border officials were suspicious, were looking for a bribe, and more or less just wanted to detain us to make sure we knew who was in control.  After a couple of hours some of the missionaries in Zaire began showing up at the border.  I’m not sure all that was said, but some people laughed, and the next thing we knew, we were rolling into the city streets of Bukavu, Zaire.

We were greeted by Jay and Diane Beeman, who had pizza ready for us.  I don’t remember the ingredients, except it was goat cheese rather than mozzerella.  Not bad.  Diane was the mastermind of our internship, that would take me on one of the most eventful 200 mile journey I’ve ever been on, preaching a sermon in Swahili in the town of Mwenga, flying into the heart of the Ituri rain forest to visit a small village and church that was a 60 kilometer walk round trip, and taking part in a prison / hospital ministry back in Bukavu.

The 200 mile Journey to Kazuza

One of the greatest highlights of this internship was the road trip. We loaded up a WW II German M.A.N. truck to 110% capacity.  With the cab of the truck full, there was only left one place for 3 interns… on top. We sat on top of the canvas and made ourselves comfortable.  We had no idea what lay ahead.

We rolled out of the streets of Bukavu and began to hit the dusty roads that would begin to wind through the mountains on our way to Kazuza. The thing you need to realize is these roads are wide enough for about 1 1/2 vehicles, on the edge of the mountain, and one wrong move and down the side of the mountain you tumble for a few thousand feet.

The farther away from the city we got, the more we began to descend into the rain forest. Although still several thousand feet up, the roads began to get worse, and then they literally became impossible beyond my comprehension.  The rain filled holes in the road were literally deeper than the truck.  These “pot holes” in the road were sometimes 300 yards long and 20 feet deep.  The truck would grind, slam into the side of the pot hole, spray mud, heave, and slosh.

As if the holes were not intense enough, the bridges that spanned creeks and rivers were draw dropping.  In some cases, it was 2 trees that had been cut down.  You lined your tires up and drove across. Other times, the bridge would literally be splintering and falling apart into the river below as you drove across.

For 4 days, we labored through pot holes and bridges.  We slept in villages, met lots of people who loved to cheer us on, and cooled off under the occasional icy waterfall we found along the way. We were becoming cowboys.  Four days to travel 200 miles.

After spending a week in Kazuza with the Reed family, we hit the road again to drive about 125 miles back up to Mwenga.  This time, I rode with Ted on the back of his Honda 175 – much preferred over the canvas-back M.A.N. truck. Navigating fragile bridges and 2-story deep potholes is more manageable on a 2-wheel 270 motorcycle, compared to the 6 ton MAN truck.

Mwenga was back up in the mountain forest.  My memories are basically 3 things – the friendliness of the people, preaching my first sermon in Africa, and the pineapple.

Ed and Ann Hegler lived on a mountain.  One of the cool features of their yard was the vast pineapple garden.  We would walk out with our machetes and hack off a fresh, “rugby-football-sized,” ripe pineapple for breakfast.  We would eat it until the insides of our mouths were raw from the acidic pulp of the pineapple.

The hospitality, giving hearts, and friendliness of a people was at times more than I could bear. They gave out of their lack and humbled me like never before. Whether in the hospital in Mwenga, eating in people’s homes, visiting with the church, or pastor Muganza, some of my greatest memories are in sharing with the people in Mwenga.

On my last night in Mwenga, we met with the church elders for dinner.  We ate, talked, laughed, and ate some more.  One of the elders gave me a tusk of some kind (I believe a warthog tusk) that I still have with me today.  It is a memory of that village, Pastor Muganza, and my first Swahili, interpreter-based sermon.

The Prisons and Hospitals

We were picked up at the grass airstrip in Mwenga by Tim Dogget, who flew us back to Bukavu. We spent the next week or so in Bukavu helping at the printing press with Jay Beeman and Ron Butler, meeting other missionary families, exploring Bukavu, the slums of Kadutu, and helping out wherever we could.

Carolyn Butler and Diane Beeman had a ministry in the hosptial and prison in Bukavu.  One thing that is still so clear in my mind was that neither place provided food for its patients or prisoners.  If you didn’t have family to bring you food, you would starve.  These two missionary ladies helped start a food and prayer ministry to these two places. We helped with the distribution of beans and fruit on those days.

The prison was an open courtyard with a few communal sleeping rooms off to the sides. People of all sorts were here, as well as a witch doctor who liked to intimidate his fellow prisoners to get an extra ration of food. The church within the prison was incredible. Even in prison, there was a joy and gratitude that is still fresh in my mind.

At the hospital, we mainly spent time in the TB, AIDS, and leprosy wards.  In 1988 AIDS was just rising to the surface.  These people were outcasts and nobody wanted them. We went and shook and held hands with all of them. That day I saw leprosy for the first time. I was scared to death, but I was more interested in making these patients feel wanted, loved, and honored.  We held hands and touched all these people. To society they were untouchable. In the name of Jesus, they were loved through the ministry of Diane and Carolyn, who had an incredible relationship with these men and women.

About half way through the summer, I was moving to a new missionary family’s house, Tim and Cheryl Dogget, and began to feel a bit strange that morning. Around mid afternoon, I began to get chilled. Here I am in the middle of Africa, and I am putting on jeans, sweat pants over my jeans, 2 shirts, a sweatshirt, and Cheryl brought me 6 blankets… and I was still shivering and shaking. Finally, I got up, got sick, and then it reversed. I was peeling clothes off until I was lying in bed in my shorts. I got up, got sick, and the fever broke.  And then it reversed.  Then it reversed again, and again, and again.

Finally, after about 6 reverses, the diarrhea came along. On the hour I was vomiting. On the half hour I was on the toilet. This happened about 6-8 times each. At that point, I had now lost 6 pounds and had nothing left. The clinic confirmed I had a case of Malaria and something nasty in my intestines (from brushing my teeth with non-filtered water).

Not much fun… but for me, along with a quick cure of some medicine (about $.40), I was on the road to recovery.

One of the first things we did that summer was visit the Mountain Gorillas in Virunga National Park.  We drove to the park and hiked through extremely dense vegetation.  Our guides and trackers were looking for a family of gorillas.  After about 3 hours we began to hear them in the trees.  I was expecting to need binoculars to see them at a distance.  I was completely surprised when this family of 9 gorillas were so close.  In fact, some of the young juveniles got to within a couple feet of us as they would tumble around. The other adults kept a distance of about 10-30 feet.

Off to the side was the silverback.  He watched us to make sure everything was safe.  We sat on the ground and made sure he knew we were not a threat. I’m not sure how long we were there. After a period of time, the silver back began to move.  He was a full grown, muscular, specimen, estimated to be 550 pounds. His head was as big as my torso. He began moving toward us, and then past us, coming to within 6 feet of us as he went by.

After not breathing for minutes it seemed, he led his family away and we sat alone in the forest, speechless, awestruck, and privileged to have witnessed what may now be one of the rarest animals to see in the wild.

I want to share about the 60-kilometer hike, the pit viper, ants, Tarzan, pygmies, and Curtis and Dan.