This is the second half of my 1988 summer trip to Zaire.  Here is the first half.

The second half of the summer began when Tim Doggett loaded us three interns into his 6-passenger, twin-engine Aztec Piper and flew us over the rain forest to the small village of Bafwasende.  There we met up with a couple of missionary families, the Bairds, and the Waltons. They quickly moved us out of their house and into the house of a local Zaire family from the church.

This was a great experience.  My family lived in a mud hut, and the father of the home was a baker.  He made bread every morning.  Nothing like a hot baguette for breakfast! We were in the middle of the rain forest – no electricity, no running water. Being so close to the equator, at about 6pm, the sun set, and it was pitch black. We made it with candles and just living in the dark.

After a few days in a village home, we set out on a 30-kilometer hike (about 18 miles) to visit a small jungle village that was inaccessible by any other means, but foot. The 18-mile foot path was surround by the tall forest, exotic birds, chimpanzees, and some of the most beautiful butterflies in the world. It took us several hours to reach the village. Hiking in, staying for a few days, visiting with the people, and hiking back are some of my greatest memories. 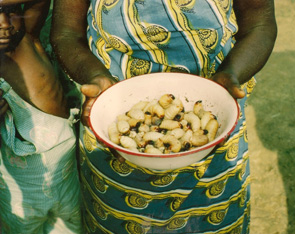 The people of the village were pygmies. Their village was centered around a fresh water spring, providing all the cold water we could drink. We ate fruit, some green stuff (which I assume were some kind of leaves), a dish called Kokoliko (which when interpreted means “jungle cheese”), and a few other items.  The highlight of the meal was a bowl full of enormous palm grubs. I could only get myself to eat one. It was a HUGE delicacy for the villagers… so I passed on eating a second grub so they could enjoy them instead.

Dan Owsley, who is taller than me, and I each slept in pygmy beds. The beds were less than 5 feet long, 2 feet wide, and about 5 inches off the ground – made from slats of bamboo. We learned to keep our feet and arms tucked in, and under the mosquito net. At night, the rats would come out and run throughout our room, bumping the under side of the bed, and fighting all around us.

Somewhere after the rats got weary of squealing and fighting, we were awakened to a child screaming from another hut. Apparently the siafu (Swahili for “soldier ants”) had made their way into the child’s room and were biting her. These ants are incredible. They will form lines as they pass through, which can take days, and even weeks. These are incredible ants, but they can be quite nasty. They are like a piranha in the form of an ant.

After a couple of days, and very little sleep, we hit the trail again and began the hike back to Bafwasende. I had a butterfly net, catching blue, green, yellow, and red butterflies along the trail. At one point, I had gotten ahead of the group by about 5 minutes. I spotted a group of butterflies in the grass. I swooped my net down and caught dozens of butterflies… which revealed what was underneath… a 4-5 foot pit viper… mostly white with red diamonds down his back. I thought he was dead with all of the butterflies, but after a poke from my net, I found out he was very much alive!

We then left northern Zaire and the jungles, returned to the city of Bukavu, and then departed for about 2 weeks to a missionary conference in Rwanda, called Kumbya. It was a great time, meeting with missionaries from all over East Africa, teaching the missionary teens, and having a blast swimming in Lake Kivu. We tied a rope to a tree about 75 feet above the water, and swung out, doing Tarzan yells, flips, dives, and flops into the water.

The best part of Kumbya was meeting missionaries from countries around the world, serving as pilots, teachers, printers, nurses, and several other capacities. The missionary teens that we taught… or should I say… that taught us… were so impressive. The depth and the sincerity of these teens was unlike any other group of teenagers I had met, and to this day, have ever met.

After Kumbya, we returned to Bukavu and spent about 5 days helping out, having some final farewells, having a going away party, and then back on the road to Burundi for our flight home. Jay and Diane Beeman drove us to Burundi in their Volkswagen van.  We stayed at a hotel on the beach of Lake Tanganyika. There were hippos and crocs in the water. Kind of scary, but even more stupid was that Dan, Curtis and myself got in the lake to swim where these animals had just been.

I landed in Chicago in early August, then caught a small plane home to Springfield. It was good to see my family, but I needed to get out and find Traci. It had been 3 months without any ability to communicate except through a few letters. No phones or anything. I still remember her when I pulled up. She was tan and had a light blue dress. We hugged and kissed, and then kissed and hugged.

How do you share all that you just went through with your fiance, the one you love the most… we came up with a solution… go back to Zaire. We were married in December 1988, and left for Zaire together for 3 months in 1991. I was going to be blessed again, but something was changing within me.

I had only been on this journey for a short time, and had seen and experienced far more than I could have ever imagined. The next part of the journey was one of the last legs where the path was smooth. Soon the journey would become rough, full of pits, and there monsters and demons.

The best part of this summer was three things: 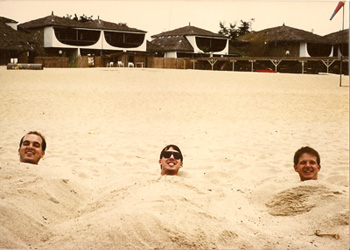 2) My time with Dan and Curtis were great. I had never met them.  We came from three different colleges and met at the airport before we boarded the plane. We became friends as we flew 9 hours to Belgium, then 9 hours to Africa. Then, as we experienced the tragedy, the splendor, the romance, the heartache, the people, the children… we became friends of a new experience, and I will be forever grateful to these two guys who helped shape those 11 weeks.

3) The missionaries of African Christian Mission were incredible… simply incredible. From the Beemans, the Butlers, the Doggets, the Heglers, the Harkemas, the Reeds, the Bairds, the Waltons, and to everyone else… never underestimate the contribution you made into our lives that summer, and for opening your homes and lives to us… may God bless you and continue… even 22 years later… to bless your homes.